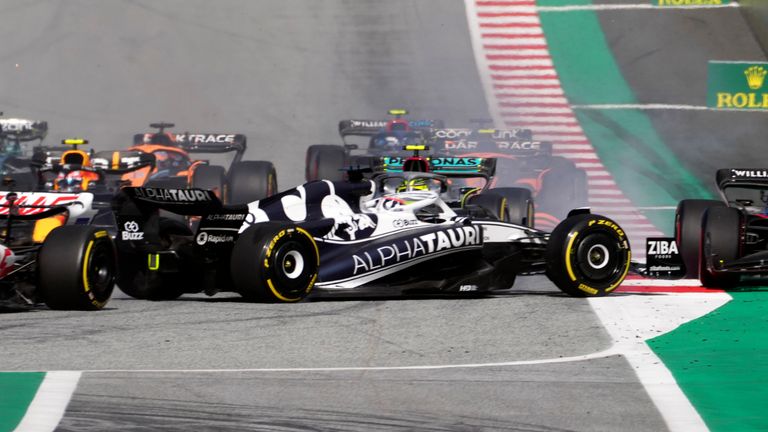 Max Verstappen cruised away from Charles Leclerc to take a dominant win in the Austrian GP Sprint and claim pole position for Sunday’s race, while Lewis Hamilton’s comeback was dented by a first-corner shunt.

Cheered on by a sea of orange at Red Bull’s home track, Verstappen closed the door on Leclerc at the start and then sped away from his Ferrari rival to comfortably take the chequered flag at the end of the 24th lap.

By winning the grid-setting Sprint, Verstappen extends his title lead with the maximum eight points and seals pole ahead of the Ferraris for Sunday’s Austrian GP, which is live on Sky Sports F1 at 2pm.

The top four all stayed in position in Saturday’s mini race, despite Carlos Sainz’s best efforts to pass Leclerc – with the Monegasque having aggressively forced his team-mate wide early on at Turn 4. 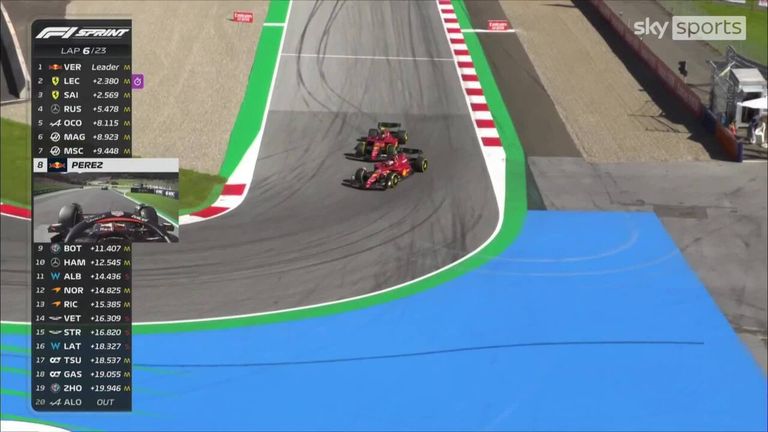 Ferarri drivers Carlos Sainz and Charles Leclerc battle it out for second position in the Sprint at the Austrian Grand Prix.

Ferarri drivers Carlos Sainz and Charles Leclerc battle it out for second position in the Sprint at the Austrian Grand Prix.

George Russell took fourth for Mercedes, ahead of Sergio Perez in the Red Bull as he enjoyed a fine comeback from 13th on the grid.

Hamilton’s recovery was less successful, having made contact with Pierre Gasly at the start.

Gasly squeezed Hamilton, who started a place ahead of him in ninth, off the line and the pair made contact, flinging the AlphaTauri into the air. That dropped Hamilton to 11th and he was later frustrated by the Haas cars, eventually getting ahead of a feisty Mick Schumacher on the penultimate lap and claiming the last points-scoring position in eighth.

There was drama before the Sprint as Fernando Alonso’s car didn’t start at the formation lap, with the Alpine having to retire after electrical issues, before Zhou Guanyu’s car pulled to a halt prior to the first attempted start.

Zhou started from the pit-lane and finished 14th, gaining places thanks to Alex Albon’s five-second penalty which he picked up for forcing Lando Norris wide. Norris eventually finished 11th, ahead of McLaren team-mate Daniel Ricciardo.

Albon also made contact with Sebastian Vettel on Saturday, forcing Vettel into the gravel and he retired early. 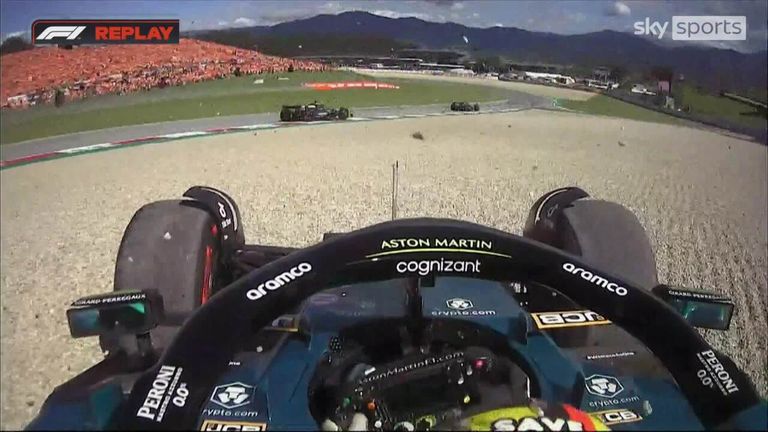 Sebastian Vettel makes contact with Alex Albon and spins off the track into the gravel at the Austrian Grand Prix Sprint.

Sebastian Vettel makes contact with Alex Albon and spins off the track into the gravel at the Austrian Grand Prix Sprint.

Max’s perfect Austria start | Can Merc keep up in the race?

Verstappen won both races in Spielberg last season and he has continued that form so far this weekend, which he has started perfectly.

On Saturday he followed up taking pole in qualifying to securing it for Sunday’s race, and he wasn’t troubled at all on his way to winning by 1.5s. 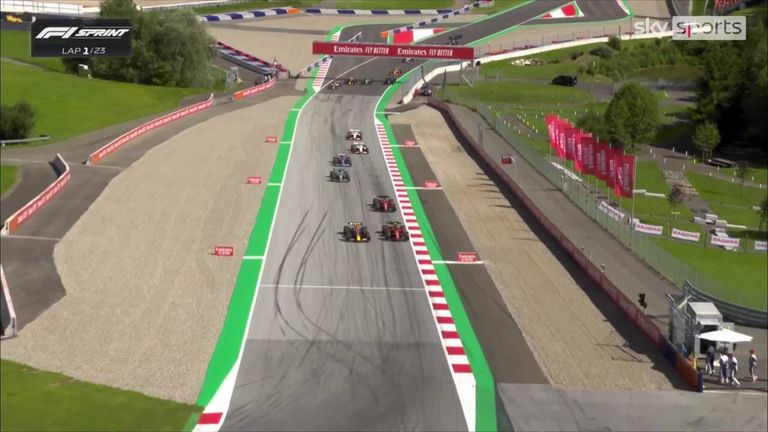 Max Verstappen retains the lead in the first lap of the Sprint at the Austrian Grand Prix.

Max Verstappen retains the lead in the first lap of the Sprint at the Austrian Grand Prix.

Verstappen’s performance isn’t just crucial in terms of getting the optimum grid slot for the 71-lap race, it also extends his championship lead from 34 points to 38, over Red Bull team-mate Perez.

Hope for Ferrari comes in the fact that Leclerc was gaining on Verstappen massively towards the end of the Sprint – although Red Bull say the Dutchman was managing the pace – while they also could and should have been closer if their drivers hadn’t squabbled for positions early on.

“Red Bull will be loving this,” said Sky Sports F1’s Martin Brundle at the time, and Sainz felt Leclerc’s defence into Turn 4 was too aggressive. The British GP winner eventually finished a distant third. 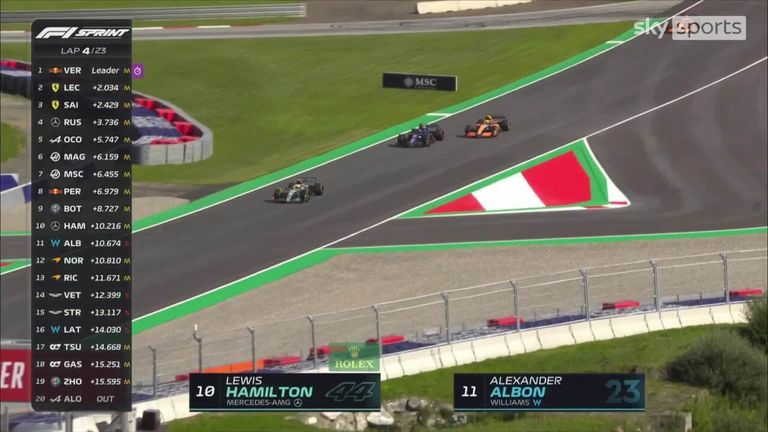 Perez’s form means he could also be a factor from fifth in Sunday’s race, while Mercedes have some work to do to get in the fight.

While Russell kept fourth position, he was much slower than the three drivers ahead, while Hamilton will only start the Austrian GP one position higher than he did in the Sprint, making collisions at the start all the more likely.

“I didn’t learn anything necessarily in the race except that we’re slower than the Haas on the straights!” Hamilton told Sky Sports F1 afterwards. “But I’ve got one now ahead of me and not two.

“We’ve got to wait to get out of the DRS train to try and reposition our car.”

On the Gasly collision, Hamilton added: “I obviously had two come around me into Turn 1 and Pierre moved across on me, and there was nowhere I could really go. Unfortunate but I don’t think I could have done anything.”

F1 2022 hits the halfway point with the Austrian GP from the high-speed Red Bull Ring on Sunday. All the action is live on Sky Sports F1, with race build-up from 12.30pm and lights out at 2pm. 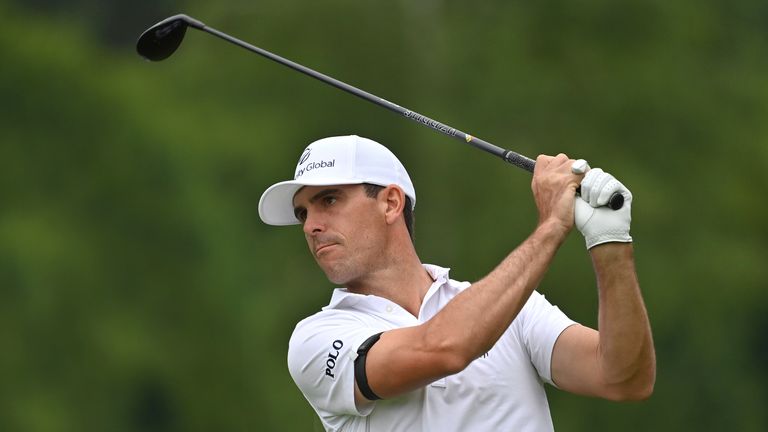 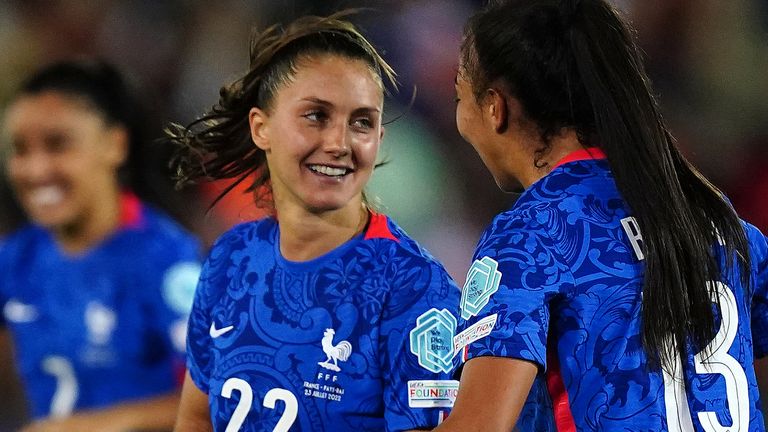