‘Like a motorbike’ – Tenebrism takes Prix Jean Prat for Moore Tenebrism made Ryan Moore’s long journey to Deauville worthwhile as the talented filly fired back to form to win a first Group One Prix Jean Prat for trainer Aidan O’Brien.

Fresh from riding Stone Age in Saturday night’s Belmont Derby in the USA, Moore – who slept on the flight to France – got aboard the 11/2 shot, who was taking on the boys for the first at the top level.

Already a Group One-winning filly after landing the Cheveley Park Stakes as a two-year-old, things had not gone quite to plan for the daughter of Caravaggio in two previous starts this season, finishing down the field in eighth when sent off favourite for the 1000 Guineas before being well held by Inspiral at Royal Ascot.

Up against the might of French 2000 Guineas winner Modern Games (7/4 favourite), Moore rode with patience behind the leading pack, including Richard Hannon’s Lusail and early leader Texas.

William Buick, on board Modern Games, appeared in trouble on the inside from the two-furlong pole, with his mount seemingly unable to quicken with his rivals.

Francis-Henri Graffard’s Rozgar, the leading hope for the home team, looked a serious danger as Christophe Soumillon angled his ride out to challenge, but all the while Moore stalked, delivering Tenebrism with a furlong to go and going away for a one-and-a-quarter length victory.

David Simcock’s Light Infantry (16/1) ran on for second, ahead of Lusail (6/1) in third, with Modern Games only fifth.

Moore told Sky Sports Racing: “She had to wait for a gap, but as soon as she got a bit of room she was like a motorbike and accelerated straight through it.

“She has always shown plenty. It was nice to come back onto a level track and nice ground. She was a real pleasure to ride.”

Moore fires in three in a row

Moore could not be stopped as the former champion followed his Group One success with victory in the following two contests at Deauville.

In the Group Three Prix de Ris-Orangis Garrus (5/1) bounced back to form for trainer Charlie Hills having disappointed down in 21st of 24 at Royal Ascot in the Platinum Jubilee Stakes.

Coming around the outside of the leading group, Moore steered the six-year-old clear of Batwan and Clive Cox’s Wings Of War running on late for third. 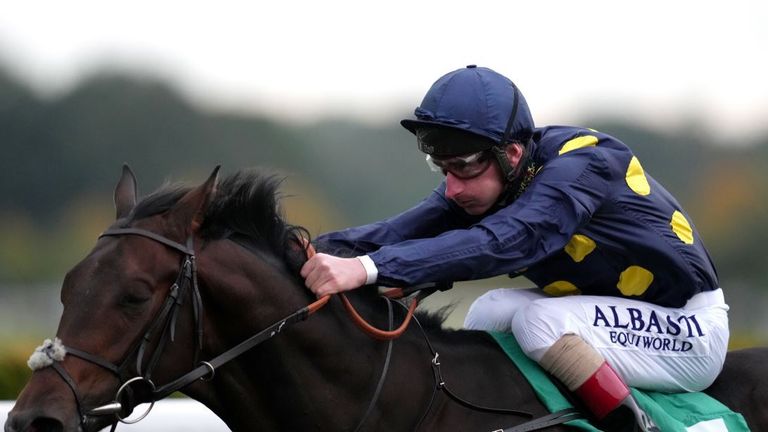 Trainer Clive Cox is hoping sprinter Harry Three can go on improving after making it three wins in a row in the Listed Prix Kistena at Deauville on Sunday.

Cox was then in the winner’s enclosure as Moore and Harry Three each completed their own hat-trick.

Sent off 11/8 favourite for the Listed Prix Kistena after victories at Newmarket and York, the three-year-old showed an impressive turn of foot to finish three-and-a-half lengths clear of main market rival Haziym.