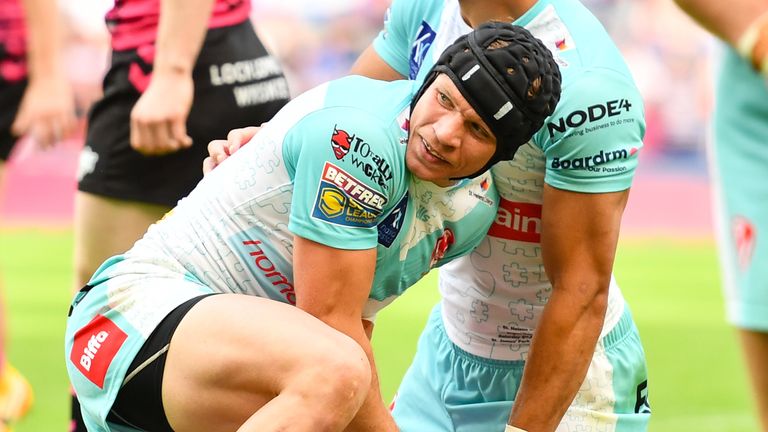 Jonny Lomax finished with less than two minutes to go as the reigning Betfred Super League champions won a see-saw contest against their old rivals; Wigan had led, but ended with 12 men after Brad Singleton’s red card

Jonny Lomax was the hero for St Helens with a game-clinching try 90 seconds from full-time which sealed a pulsating 20-18 triumph over rivals Wigan Warriors at the Betfred Super League’s Magic Weekend.

A converted try from Bevan French nine minutes before the break saw Wigan edge a low-scoring first half in the derby clash at St James’ Park 6-2 after Jon Bennison had kicked Saints in front with a sixth-minute penalty.

John Bateman’s try early in the second half put more daylight between the teams, but scores from Joe Batchelor and Jack Welsby got St Helens back into the contest before the Warriors had Brad Singleton sent off for a dangerous tackle on Curtis Sironen.

Bennison drew Saints level with a penalty but despite being a man down, Wigan hit the front again through the Field-French combination. But Regan Grace’s unconverted try kept last year’s Grand Final winners in the hunt before Lomax finished to snatch victory at the death.

As well as being a derby clash between two of rugby league’s biggest rivals, the second encounter of the weekend in Newcastle pitted the teams occupying first and second in Super League against each other.

It was perhaps no surprise when it was something of a defensive tussle for much of the opening 40 minutes, with the only score for a long time being the penalty from Bennison, on kicking duties for St Helens in the absence of injured pair Tommy Makinson and Mark Percival, who in turn had taken the role due to Lewis Dodd’s season-ending injury.

It was the reigning champions who had done much of the attacking, only to find themselves thwarted at every turn by some stubborn defence from the Warriors in their own half. 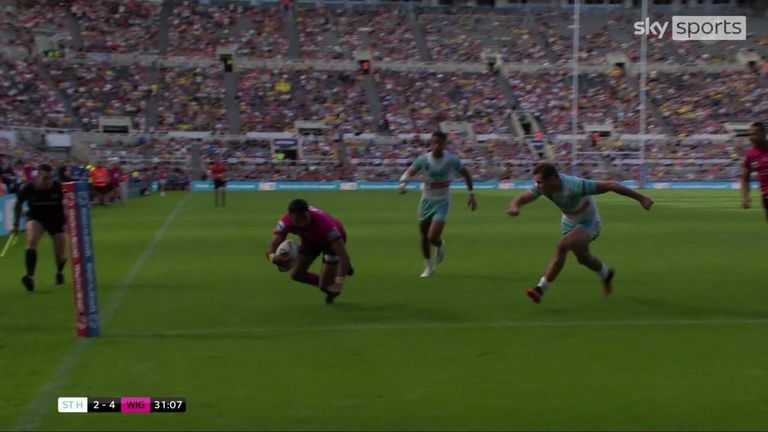 Alex Walmsley was unavailable for St Helens due to the birth of his third child, while fellow front row Matty Lee made his 100th appearance for the club.

Wigan brought Cade Cust and Morgan Smithies back into the side, while Abbas Miski and Kai Pearce-Paul were the men to drop out.

Having seen out that period, Wigan gradually grew as an attacking threat and their patience was rewarded on the half-hour mark when they seized an opportunity to attack from a scrum after Joe Batchelor knocked on, while trying to make an interception.

The Betfred Challenge Cup winners worked an attack down the right and when Jai Field fired a cut-out pass to French on the wing, the Australian accelerated away to finish in the corner followed by Harry Smith converting.

The Warriors were denied a second try on the stroke of half-time when Sam Powell was ruled by the video referee to be offside from a kick in the build-up, but they did strike again four minutes after the restart.

French was involved again, but this time as provider after being released down the right touchline again. He put in a perfectly weighted kick which sat up for Bateman, who collected and finished for another converted score. 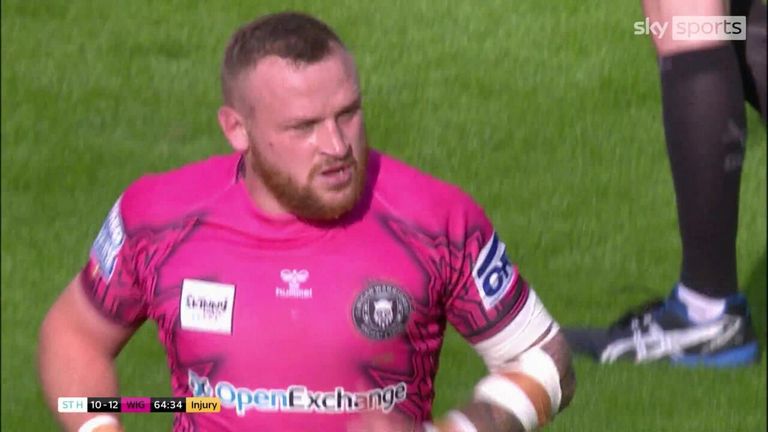 But back-to-back unconverted tries from St Helens dragged them back into the contest, with the first coming on 52 minutes when second row Batchelor showed some hitherto unheralded kicking skills by dabbing through a grubber and chasing it down to finish in the right corner.

Then, eight minutes later, Bateman lost possession midway inside Wigan’s half and the ever-alert Welsby pounced to snaffle up the loose ball and step on the gas to force his way over in the corner.

Bennison was unable to convert either score, but he was on hand to draw Saints level with 14 minutes to play by kicking a penalty after Singleton was dismissed for a high shot on Curtis Sironen.

Nevertheless, Wigan went back in front after French chased down a kick from Field and showed some superb athletic ability to finish for another converted score with nine minutes left in the contest. 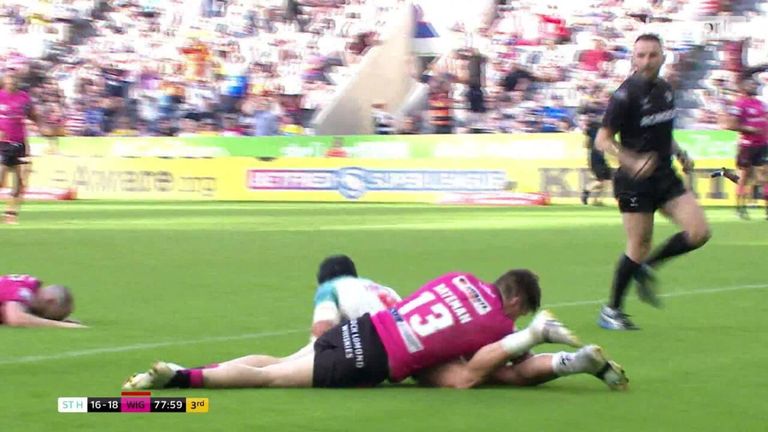 Jonny Lomax wins the game for St Helens with less than a minute left on the clock!

Jonny Lomax wins the game for St Helens with less than a minute left on the clock!

As the old saying goes though, never write off the Saints and they showed that as rugby union-bound winger Grace raced over on the left with five minutes to play, followed by Lomax racing clear for the winning try after Batchelor broke and passed inside to the half-back. 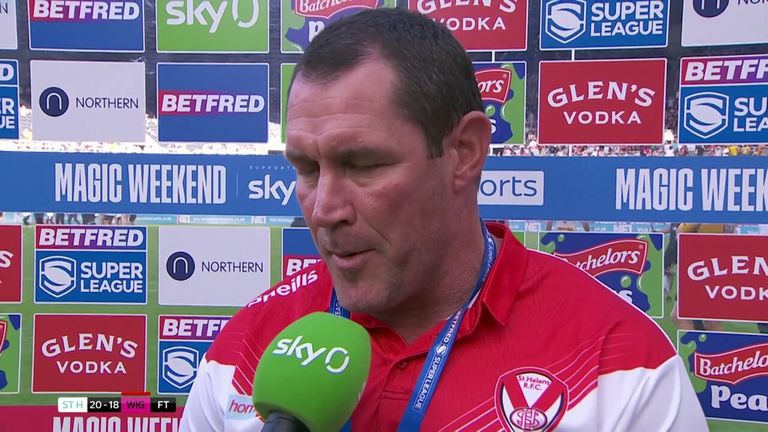 “It was a really good game of footy. Two good teams, we both played well and different times and we both had our chances. I knew we were going to get more opportunities int he second half, we just had to be a little bit more paitent, and to their credit they did that.” 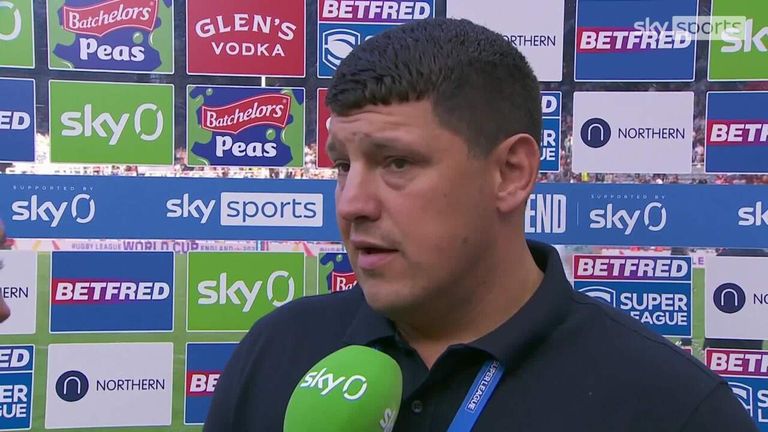 “On the whole, Saints got what they deserved. It’s a special win for them given the players they had missing and credit to them. I’m proud of our effort and we’ll learn a lot from today.” 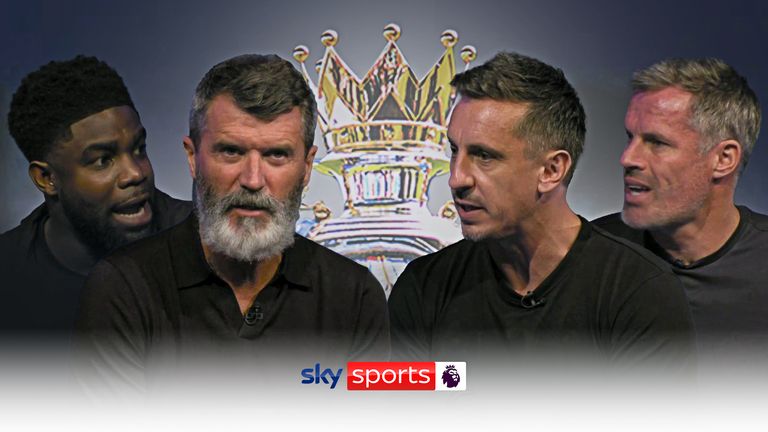 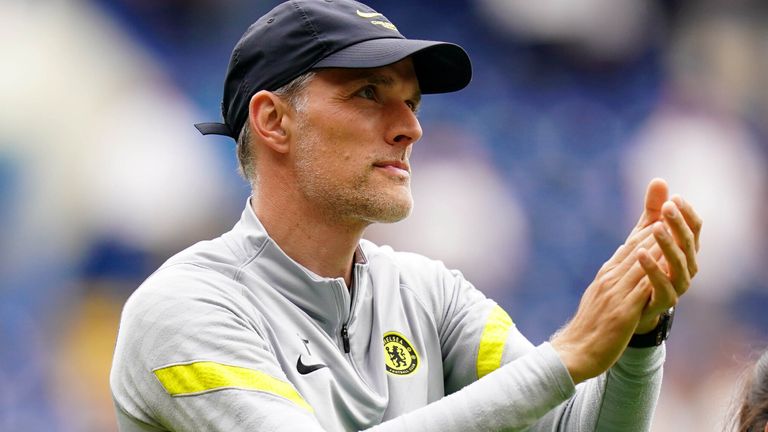 Is Chelsea’s restructure a help or hindrance to Tuchel?