From Loughborough to the NFL for Odeleye: ‘I had to turn my phone to Do Not Disturb!’ 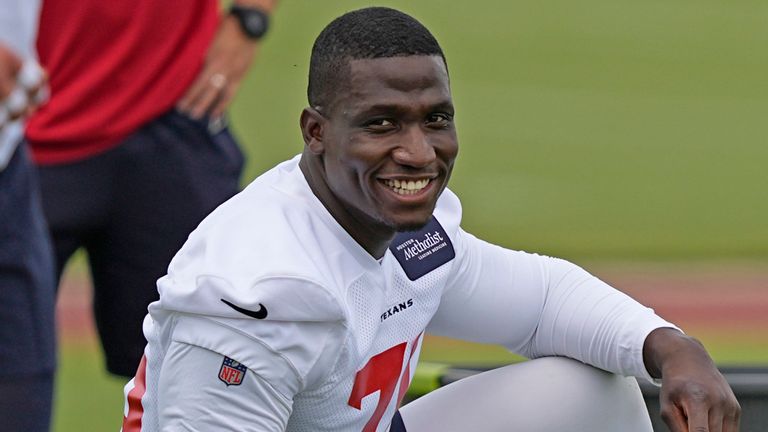 It’s 7.15am in Houston, but mid-morning for Texans defensive end Adedayo Odeleye as he sits down, proudly sporting team apparel, to chat to Sky Sports having been awake for well over two hours.

The former Loughborough student admits the crack-of-dawn rises are proving far easier at the start of a day in the NFL compared to dragging himself to a university lecture on time. The latter is of the past, though without it he may not be sitting here.

He also admits he gets to bed far earlier as an NFL player than he might have as a student, so there is that.

Odeleye is just weeks into his NFL career after it was announced he would be allocated to the Texans as a product of the International Player Pathway, from which University of Nottingham graduate Ayo Oyelola also secured a spot with the Jacksonville Jaguars. Hereby presenting the latest UK ambassadors striving to emulate Efe Obada.

“I was in my kitchen with my mum and brother when I found out, I had a scheduled call with the scouts at the IPP, I was happy with the spot I was in but you never know until you get the news,” he told Sky Sports.

“I was excited and anxious at the same time to get started and I was literally ready to fly out the same day, but I had to wait about a week, it was hard to focus on anything else during that week for sure.

“When the news got posted on socials I had to put my phone on Do Not Disturb for about 24 hours because it just kept blowing up. That’s part of the game I’m also excited to participate in.

“The fans are a very important aspect of the sport and that’s one of the aims of the programme, it’s not just to get athletes in the league but also to grow the brand worldwide and try get more UK and Nigerian fans watching and playing the sport. Whatever part I can do to make that happen I’ll be happy to do it.”

By now Odeleye’s story is no secret: born in Nigeria, spent time in Saudi Arabia, moved to the UK with his family aged nine before eventually enrolling at Loughborough where he began playing football on the recommendation of the university team captain that had been struck by his dwarfing frame.

Familiarity with such stems from Odeleye and Oyelola having both been part of the 2021 International Player Pathway training phase, only for neither to be assigned to a roster.

Odeleye subsequently spent last season gaining experience with the Berlin Thunder in the European League of Football, before returning to stake his claim at the International Scouting Combine held at Tottenham Hotspur Stadium in October. This time he was ready.

“I had really positive feedback from the guys and scouts the first time, I knew playing at a high level of football was something I definitely had to do so that’s why I went over to the European League to try and improve,” he said.

“Also off the field, in the gym I was really really focused, I kind of changed my whole gym training pattern to become a bit more functional, to get more comfortable and moving my body more efficiently. Obviously it’s paid off.

“I was very disappointed not to make the programme last year but it was understandable for them to say I probably needed one more year to try and improve on different aspects. I believe I definitely did that.” “When younger kids ask how they can replicate my journey, I would say you can only put yourself in the best position possible. Anything beyond that is kind of out of your hands, there are so many people who without them I wouldn’t be where I am right now.But the important thing is when they came looking for me, I was able to put my best foot forward and be the best version of myself that I can be.”

Odeleye on readying himself for the NFL

With regards to first impressions of NFL life, he has welcomed the hours spent burying his head in a playbook that might have once been daunting as a latecomer to football’s geeky intricacies.

Rookie mini-camp has meanwhile introduced him to the challenge of competing with some of the most refined and towering athletes on the planet.

“It’s been pretty much as I expected, I came in here expecting high level, high intensity football, and very very close attention to detail, that’s exactly what I’ve got,” he said.

“Everyone is a few steps higher physically than what I’m used to, but that’s what I expected as well.

“In terms of the Xs and Os, that’s really not something I’ve ever struggled with. I’m a very big fan of the sport, the way I watch football is a bit different, I watch on Sundays and then during the week I go through the games and breakdown what’s happening behind the scenes and why players are doing what they’re doing, what coaches are asking players to do.

“That’s really helped me to increase my football knowledge and make it easier to integrate myself into the team.”

He studies the Aaron Donalds of the league, and why not? He admires Joey and Nick Bosa and their cocktail pass rush moves, because who wouldn’t? 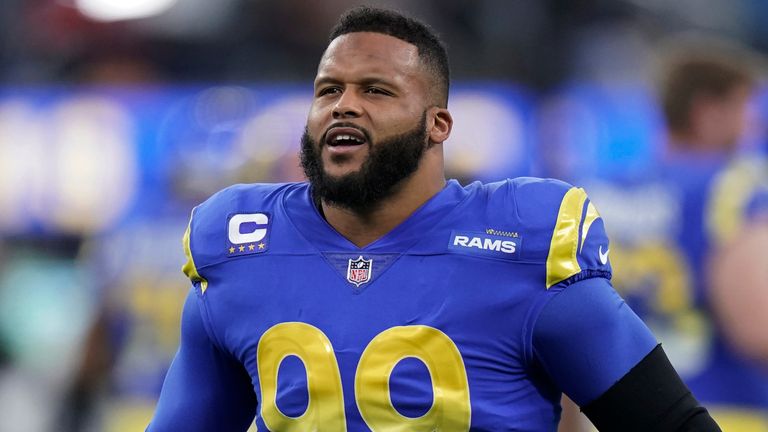 “There are very very few Aaron Donalds out there but obviously if you watch his game there are things you can replicate and it will definitely improve your game. I like watching the Bosa brothers just because they use their power and speed to try and get around tackles, that’s something I feel like in the future is going to be part of my game as well.”

Dayo Odeleye on players he likes to watch

He is not naive to look beyond the myriad of learning resources, but he also wants to be his own player, his own defensive end.

That being a hand-in-the-dirt operative with first-step burst and rangy arms with which to swim and wrap his way to tackles and quarterback pressure.

“I’m definitely a three-point stance, that’s what the team is asking of me,” he explained. “I’ve played four-point previously, I played two-point last year as well. But two-point is definitely something I’m comfortable with as well, that’s how you get the quickest get-off.

Odeleye’s development is likely to see him become familiar with Laremy Tunsil as he matches up directly against the two-time Pro Bowl offensive tackle on the practice field this summer.

Even at 6’5″ and 265lbs, Odeleye, perhaps for the first time, finds himself out-sized.

“He’s a big guy, I like to think I’m pretty big myself but he is a mountain of a human,” he laughs. “Especially in camp, when we get pads on, it’s a challenge I relish.

“The best way to improve your skill levels is to try and go against the best and we all know he’s one of the best out there.

“Going against someone with that experience, that skill, it can only do well for me and the whole d-line.”

His arrival coincides with a new phase for the Texans following the promotion of Lovie Smith to head coach in the wake of David Culley’s departure on the back of a 4-13 campaign.

“He’s great, you can definitely see the type of philosophy and mindset he’s trying to integrate into the team and it’s something I feel like, given the opportunity, the team is going to take onto the field and make plays with,” he said of Smith.

“He loves playmakers, trying to get the ball from the offense. The defense, especially on the backend, we’ve got playmakers.

“It’s going to be a very fun year to see exactly how it works out.”

Some have a desired opponent, others dream of playing in a specific stadium.

For Odeleye, he “would just be happy to be on the field”.

Stay across skysports.com/nfl for the latest news, features and interviews as we build up to the 2022 NFL season; you can also listen to Neil Reynolds and Jeff Reinebold on the Inside the Huddle podcast, and catch Good Morning Football and Pro Football Talk on selected Sky Sports TV channels. Perfect Power all class to win Commonwealth Cup for Fahey 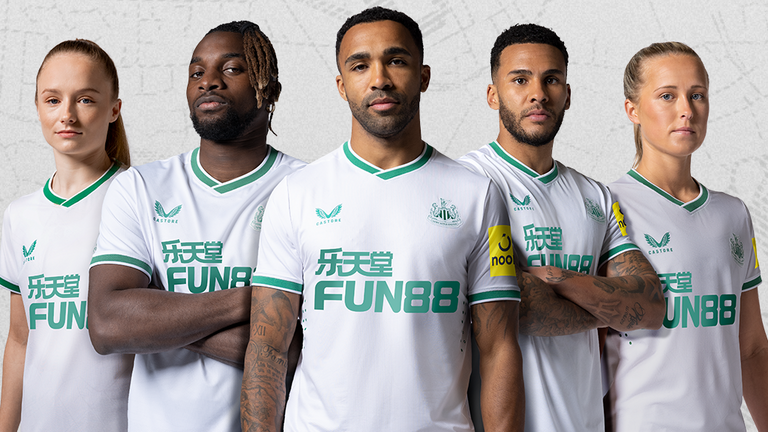