England dig in to set up series decider vs Australia

Wallabies came back from 19-0 behind to trail 22-17 vs England in the second Test, facing 14 with Marcus Smith in the sin-bin, but England held out defensively before adding a further Owen Farrell penalty to set up a series-deciding third Test in Sydney next week

England dug in to force a series-deciding third Test against Australia, as Billy Vunipola’s converted try and six Owen Farrell penalties secured a 25-17 second Test win over the Wallabies in Brisbane.

England dominated the first half to get out to a commanding 19-0 at Suncorp Stadium in Brisbane after Vunipola struck from a rolling maul and Farrell kicked four penalties, with Australia’s only points of the opening 40 minutes coming via a Taniela Tupou try.

Farrell struck again for a 22-7 lead, but momentum turned thereafter as Samu Kerevi crossed for a try and Noah Lolesio kicked a penalty either side of a Marcus Smith sin-binning for a deliberate knock-on.

England dug in to keep the Wallabies out when a man down, however, with Farrell adding another penalty to take the game away from Australia and set up a series decider next week, live on Sky Sports.

No doubt frustrated and determined by last week’s defeat vs 14 men, England began in the ascendency as loosehead Ellis Genge ran over the top of Wallabies skipper Michael Hooper with a stunning early carry.

Sam Underhill came in to start for England in the back-row in place of Tom Curry, as Eddie Jones made four changes; Uncapped Guy Porter started at centre for Joe Marchant, uncapped wing Tommy Freeman came in place for Joe Cokanasiga, scrum-half Jack van Poortvliet at scrum-half for his first start in place of Danny Care.

Such an impact set the platform for England to attack from within the Australia 22, and after kicking to the corner following a penalty, Vunipola was on hand to touch down as a dominant maul roared forward. 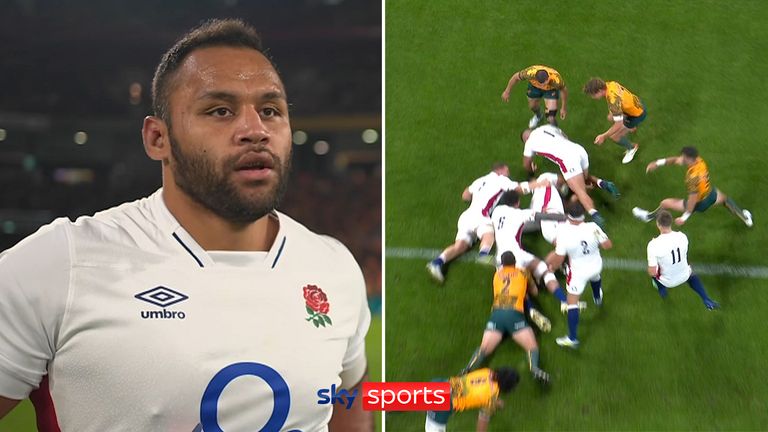 Maro Itoje won a lineout to set up Billy Vunipola who grabbed an early England try.

Maro Itoje won a lineout to set up Billy Vunipola who grabbed an early England try.

Farrell increased the advantage in the 11th minute off the tee with a crisp penalty strike, before the England lead was stretched to 13-0 when returning Wallabies prop Taniela Tupou was pinged for a dangerous clear-out and Farrell punished him.

Genge was fortunate not to receive a yellow card soon after, halting England’s momentum as he needlessly left a forearm on the neck of Wallabies scrum-half Nic White.

A scrum penalty saw England relieve the pressure before a Courtney Lawes breakdown turnover saw the visitors attacking again, and soon they were facing 14 men.

England attacked at pace within the Wallabies’ 22, battering at the Australia line, before Smith and co sought to go wide to Tommy Freeman on penalty advantage. Australia replacement back Izaia Perese – on for the injured Jordan Petaia – looked to intercept but knocked on, with play originally going back for the first penalty before the intervention of TMO Joy Neville.

Neville adjudicated the Perese attempt as an intentional knock-on and sin-binning, a decision which was incredibly harsh based on replays which appeared to show the Wallaby genuinely trying to catch the ball.

Farrell tapped over the simple penalty for 16-0, but were thwarted in their attempts to add further scores during the sin-bin period, as first Philip counter-rucked superbly, before Hunter Paisami put in a brilliant tackle on Jack Nowell.

Farrell did add three more points before Perese returned, after an Australia lineout indiscretion, but Australia finally arrived into the Test three minutes before the break when Tupou crashed over in their very first 22 entry, with Paisami and Angus Bell carrying fantastically in the build-up.

Lolesio converted to leave the half-time score 19-7, after Farrell had missed touch with a penalty from hand with the clock in the red and England had lost lock Maro Itoje due to a head knock.

It was the visitors who struck first in the second period through Farrell after another Wallabies offside, but Australia responded with a superbly-worked Kerevi try to breath life into their attack. 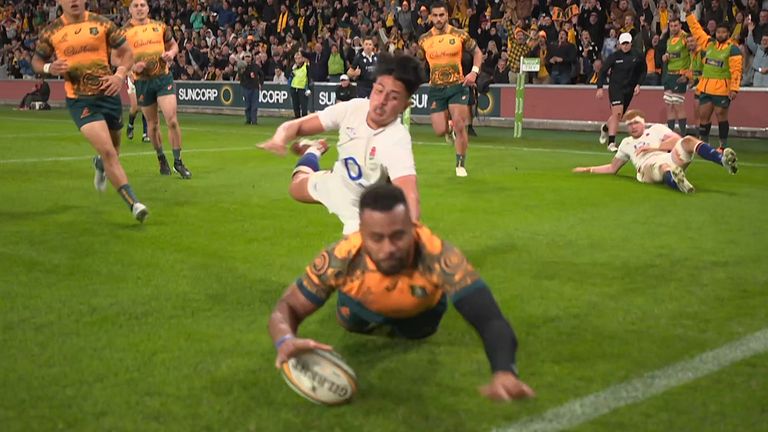 Samu Kerevi was in plenty of space on the wing and took full advantage to close the gap on England.

Samu Kerevi was in plenty of space on the wing and took full advantage to close the gap on England.

A hard carry from Rob Leota soon had Australia on the front foot again, and when Smith stuck out a hand with the Wallabies attacking near the 22, he was sent to the sin-bin before Lolesio narrowed the lead to 22-17.

A sensational White kick had Australia putting pressure back onto the England 22 before long, but the visitors dug deep to hold firm and avoid further concessions before Smith’s return.

A stunning Tom Wright break from deep gave the Wallabies another chance within the England 22, but the ensuing Folau Fainga’a lineout was critically thrown crooked.

A fantastic Farrell kick-pass to Jack Nowell got England back into the attacking groove, and saw three more points added after another offside call, crucially increasing the lead back to two scores.

Lawes produced another brilliant breakdown penalty to stop Australia’s next attempt to create, and though Farrell blotted his kicking copybook with his only miss off the tee, the Wallabies couldn’t score again.

England are next in action for the deciding Test of the three-Test series vs Australia in a week’s time in Sydney on Saturday, July 9, live on Sky Sports Action from 10.15am (10.55am kick off). 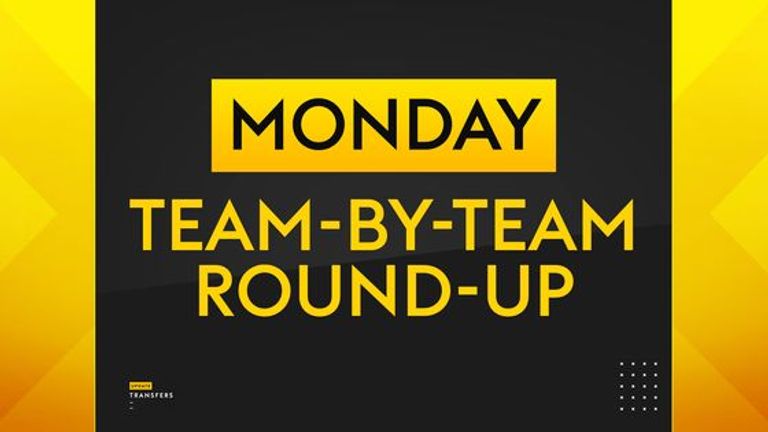 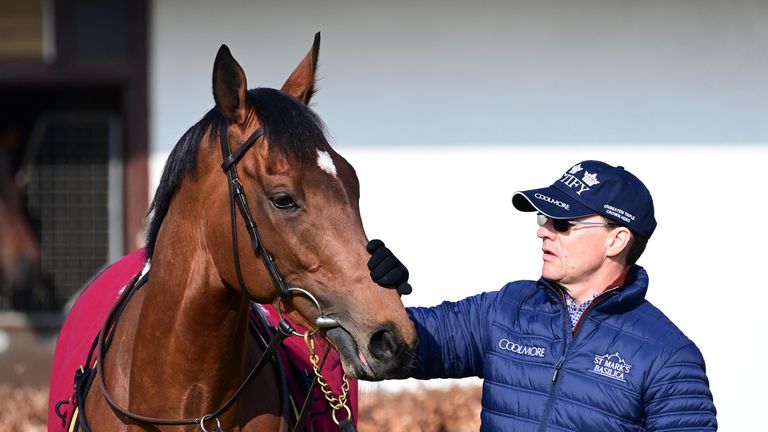 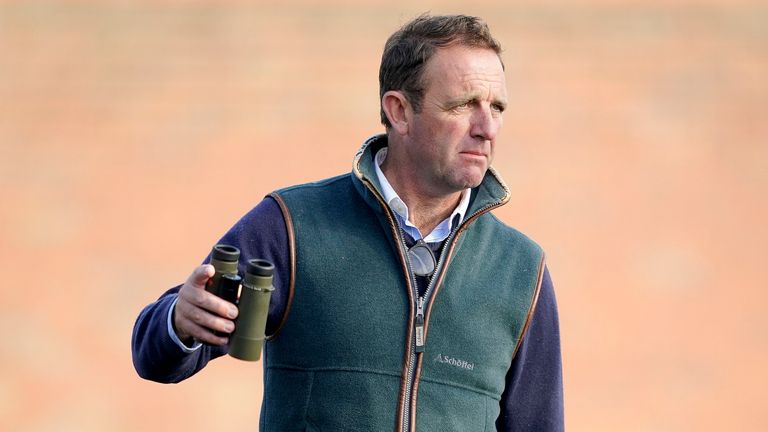